Figure 1. Volcanic eruptions on Io. Images are from NASA and were compiled by Lopes and Williams (2015).

We will continue with our look at Revolutionary Eruptions in this post by traveling 365 million miles to an alien world, a world teeming with volcanic activity, a world where surface temperatures average 202˚F below zero, a world that looks a lot like a pizza. In doing so, we’ll see the importance of tying together the ethereal inquiry of scientific theory and the grounding truth of observation.

Volcanoes are not just confined to the habitable mass of silicates and iron we call Earth. Volcanism is ubiquitous throughout the solar system, and beyond. There is no better example of extraterrestrial volcanism than there is on Io (Fig. 1), one of four large moons of Jupiter known as Galilean satellites. Io was quite enigmatic for a period following its discovery by Galileo Galilei in 1610. Our understanding of Io took a great stride forward during the flybys of Voyager 1 and 2 spacecraft in 1979. Days before the first flyby, a landmark study argued that the gravitational influence of Jupiter and its other moons exert a massive tidal force on Io’s solid body. The tides have an amplitude of 330 ft! The authors of the study suggested that friction from the internal stretching of the moon results in astronomical heat production. The heat, they predicted, is vented by pervasive volcanism*.

Figure 2. Eruptions on Io. This picture, taken on March 8, 1979, was our first close view of Io. Two volcanic plumes (or billowing clouds of ash and gases), indicating concurrent eruptions of two volcanoes, are visible. Image is from NASA.

Voyager 1 gave us our first close view of Io in March 1979 (Fig. 2). In the grainy first images relayed back to Earth, scientists at NASA discovered what looked like two billowing clouds of ash and gas called volcanic plumes. Thermal mapping of the surface of Io by Voyager 1 showed abnormally high temperatures in specific regions, one of which corresponding with a suspected plume. The images and thermal mapping together were strong evidence of vigorous volcanism on Io. Four months later, the flyby of Voyager 2 occurred. By this time, the eruption of one volcano, Pele, had ceased (Fig. 3). The eruption appeared to have deposit material that filled in an area of 10,000 km2! 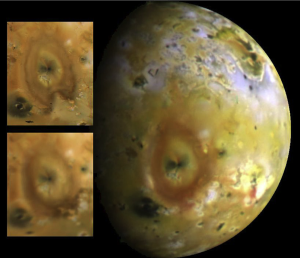 Figure 3. Volcanic deposit on Io. The flyby of Voyager 2 occurred four months after Voyager 1. By this time, the eruption at Pele had ceased. The upper inset image shows Pele during the flyby of Voyager 1. The lower inset image, from Voyager 2, shows a large area surrounding the volcanic vent that has been filled in. Images are from NASA and were compiled by Lopes and Williams (2015).

There have been no fewer than 5 NASA missions that have informed our view of Io. Our picture of Io is coming in to focus, and we can now see that it is a world of the imagination. Io’s surface is pocked with volcanoes and stained an eerie hue of yellow from their activity (Fig. 4), testament to its status as the most volcanically active body in the solar system. Massive eruptions continuously reshape the surface (Fig. 5). Plumes can reach heights of nearly 190 mi, launching materials clear into space. Jupiter’s hulking mass emits an extraordinary magnetic field, which draws off 1 ton of gases and dust from Io’s atmosphere every second! Io is truly a remarkably unique presence in the solar system.

Figure 4. Surface of Io. In the time since Io’s discovery in 1610, our understanding of this bizarre world has grown with leaps and bounds. This map demonstrates our great progress. Image is from NASA.

* Volcanoes are a great way to transport heat from the interior of a planet to the exterior. In fact, that’s why they exist. I will return to this idea in the next post.